VARANGER
A unique Spring/Winter week, where we have selected some of the very best bird and landscape photo opportunities on the Varanger Peninsula in Norway. Up here, the taiga forest meets the windswept, snow-covered tundra and the dramatically rugged coastlines of the Arctic Ocean. Ancient agricultural lands dating from long before the Viking Age stretch in a thin border along the coast. Inside of that, after a narrow fringe of low birch forest, the open tundra stretches mile after mile within the Varanger Peninsula National Park. At this time of year, these are a snowy winter landscapes in sub-zero temperatures, in wonderful Arctic winter light that can offer strong pastel colors, long shadows, dramatic clouds, snowfall and brilliant photo opportunities of many different kinds. The snow-covered tundra landscape shows us the still reasonably undisturbed quality of the Arctic wilderness up here.

KING EIDER, STELLER´S EIDER, COMMON EIDER AND LONG-TAILED DUCK
We photograph the almost unbeliavably elegant Arctic ducks King eider, Steller’s eider, Common eider and Long-tailed duck from custom-built floating pontoon hides, where we lie, dry, safe and comfortable, right at birds’ eye level just above the waterline. These world-unique and world-famous floating hides give us phenomenal opportunities for close encounters with these truly picturesque High Arctic ducks, so we decided to invest two days in these hides, in order to maximize our chances of fine pictures of these charismatic birds, taking into account the always fickle factors of light and weather. 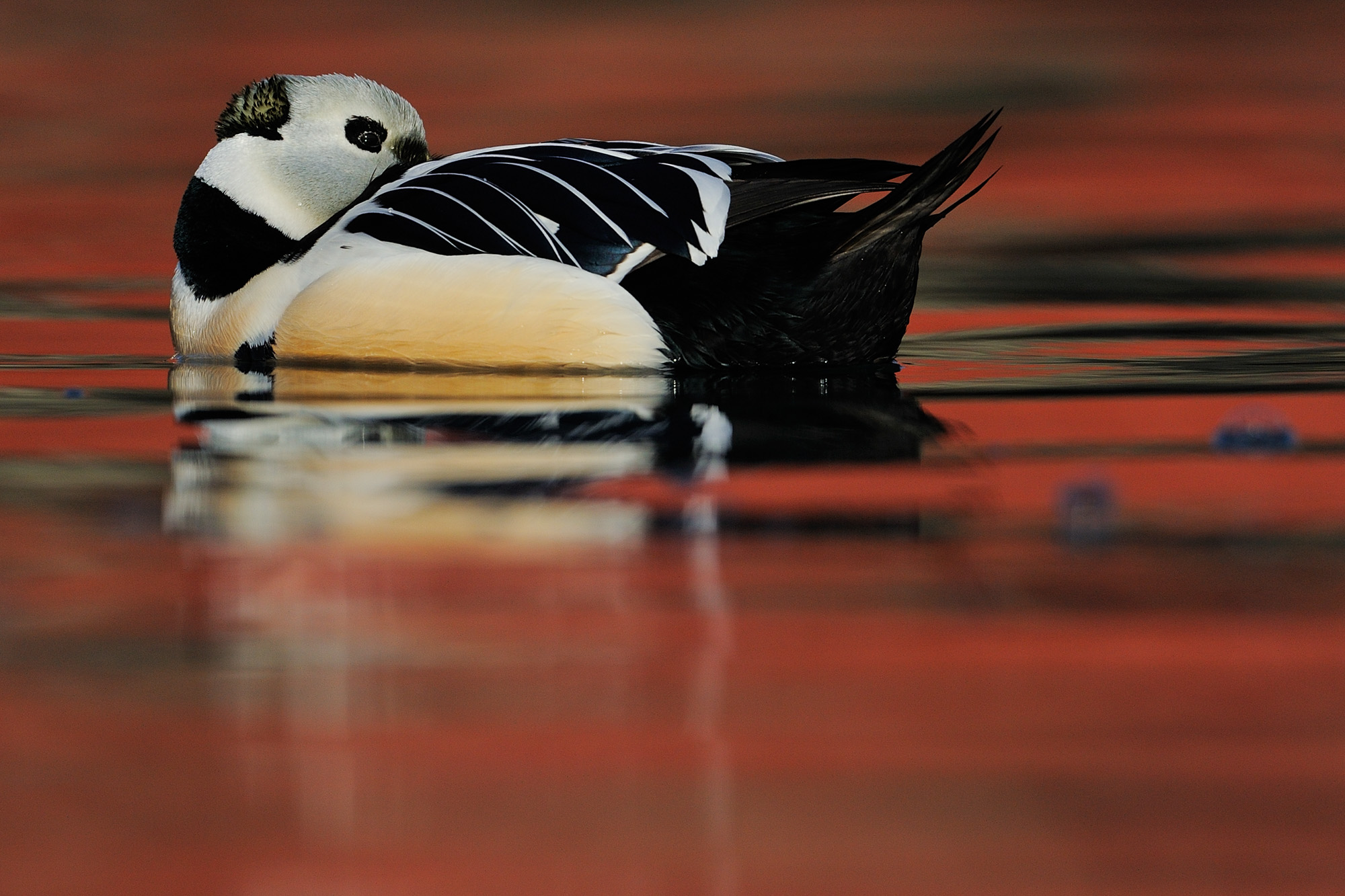 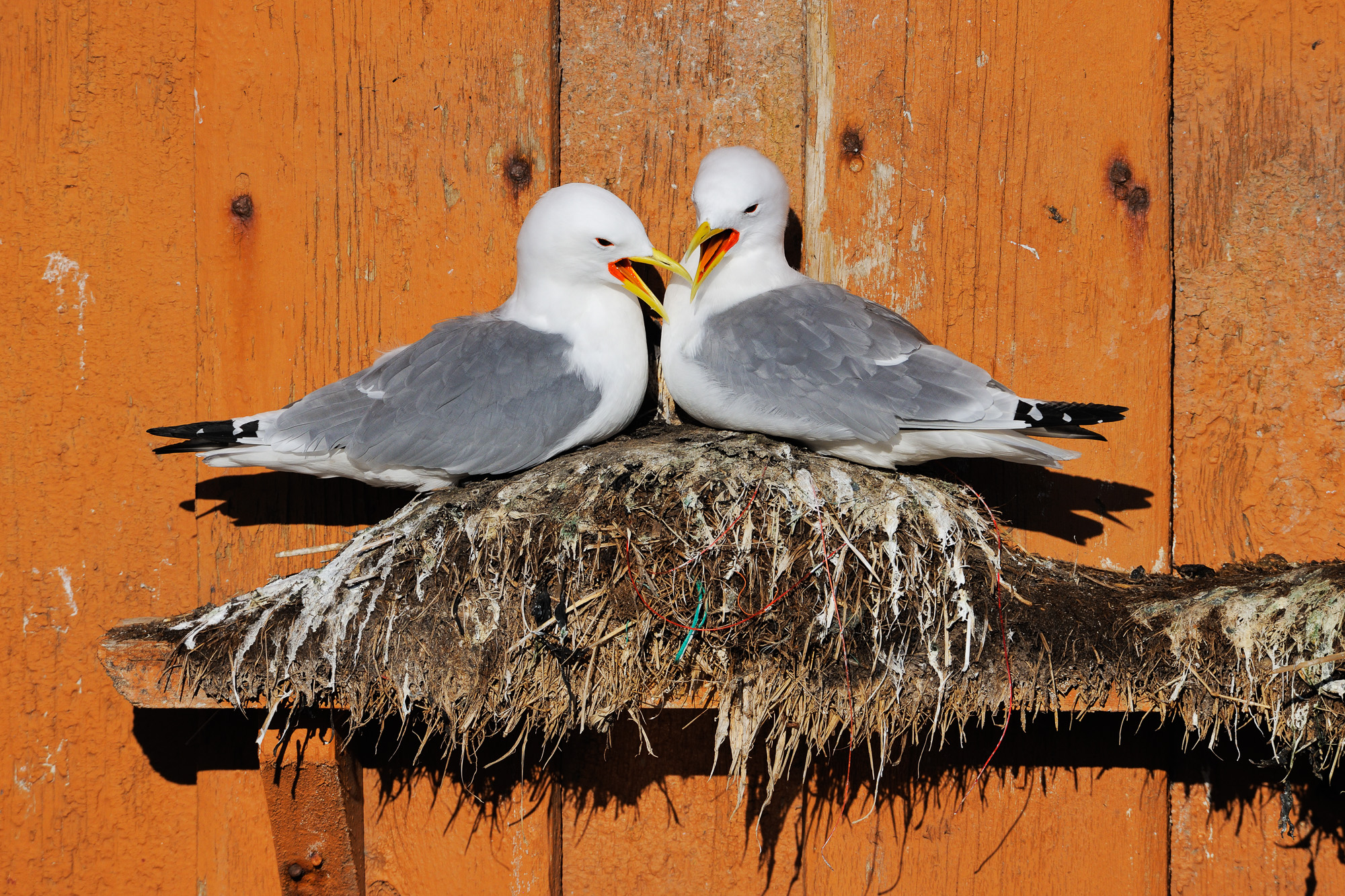 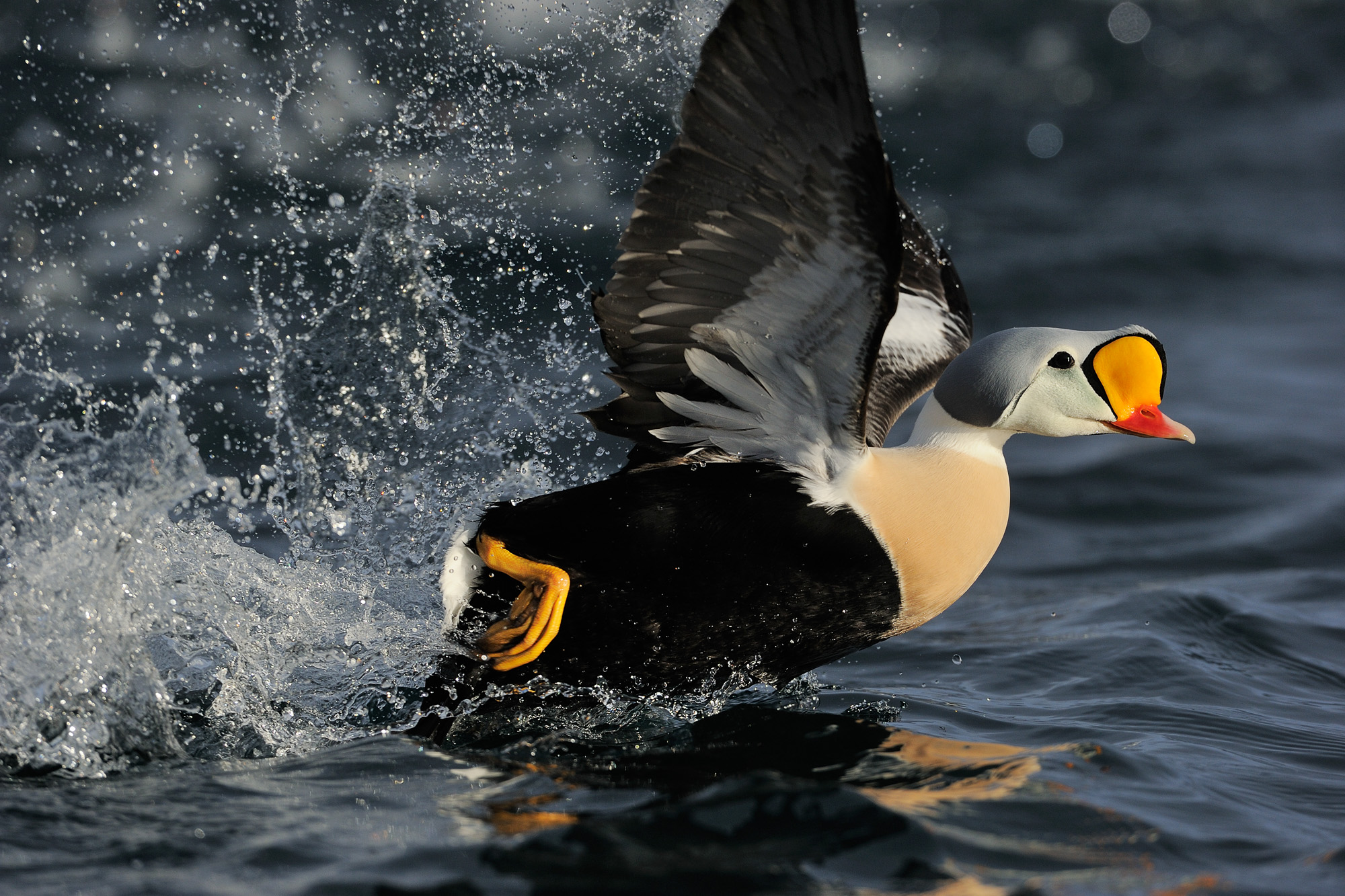 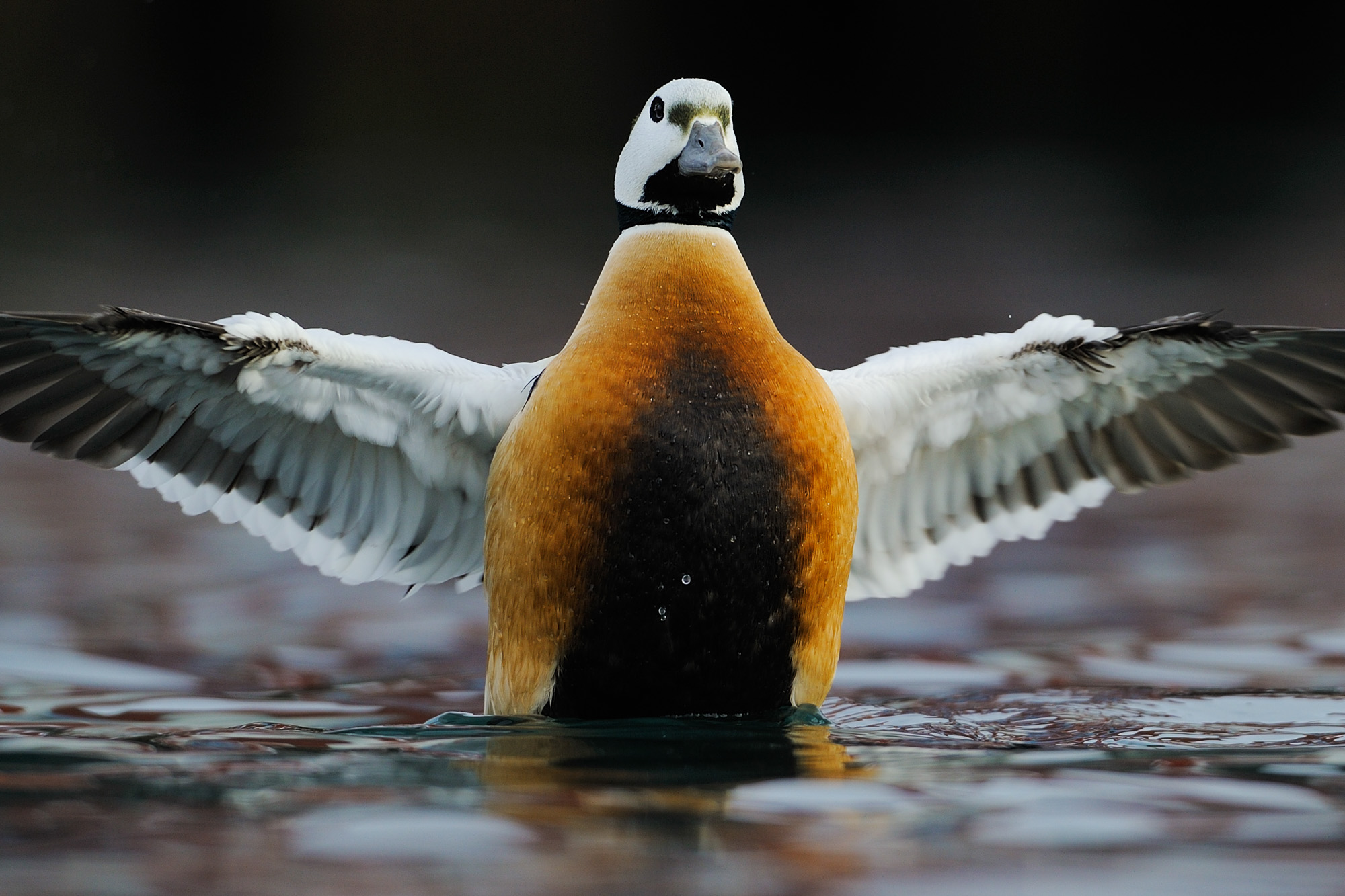 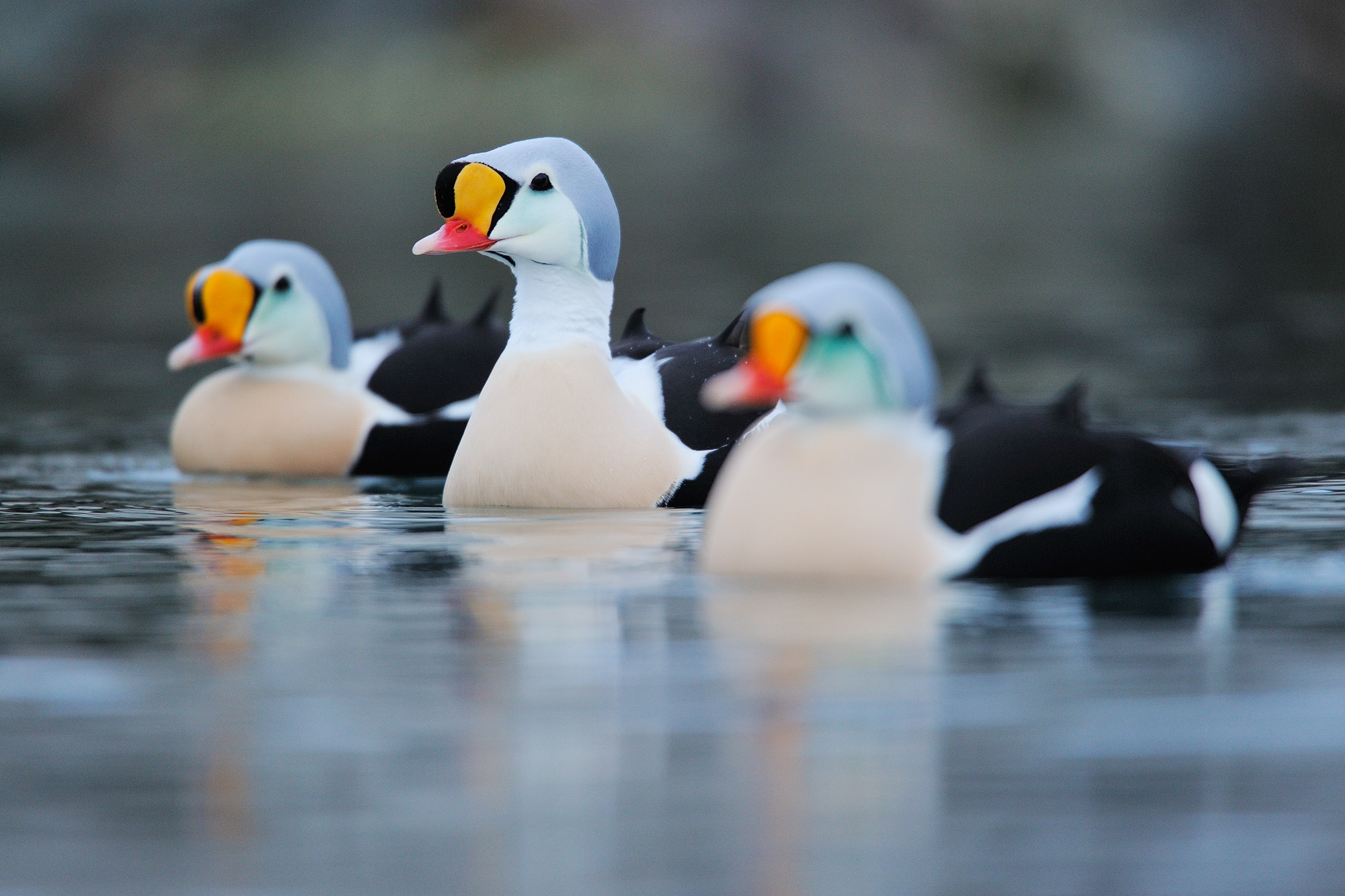 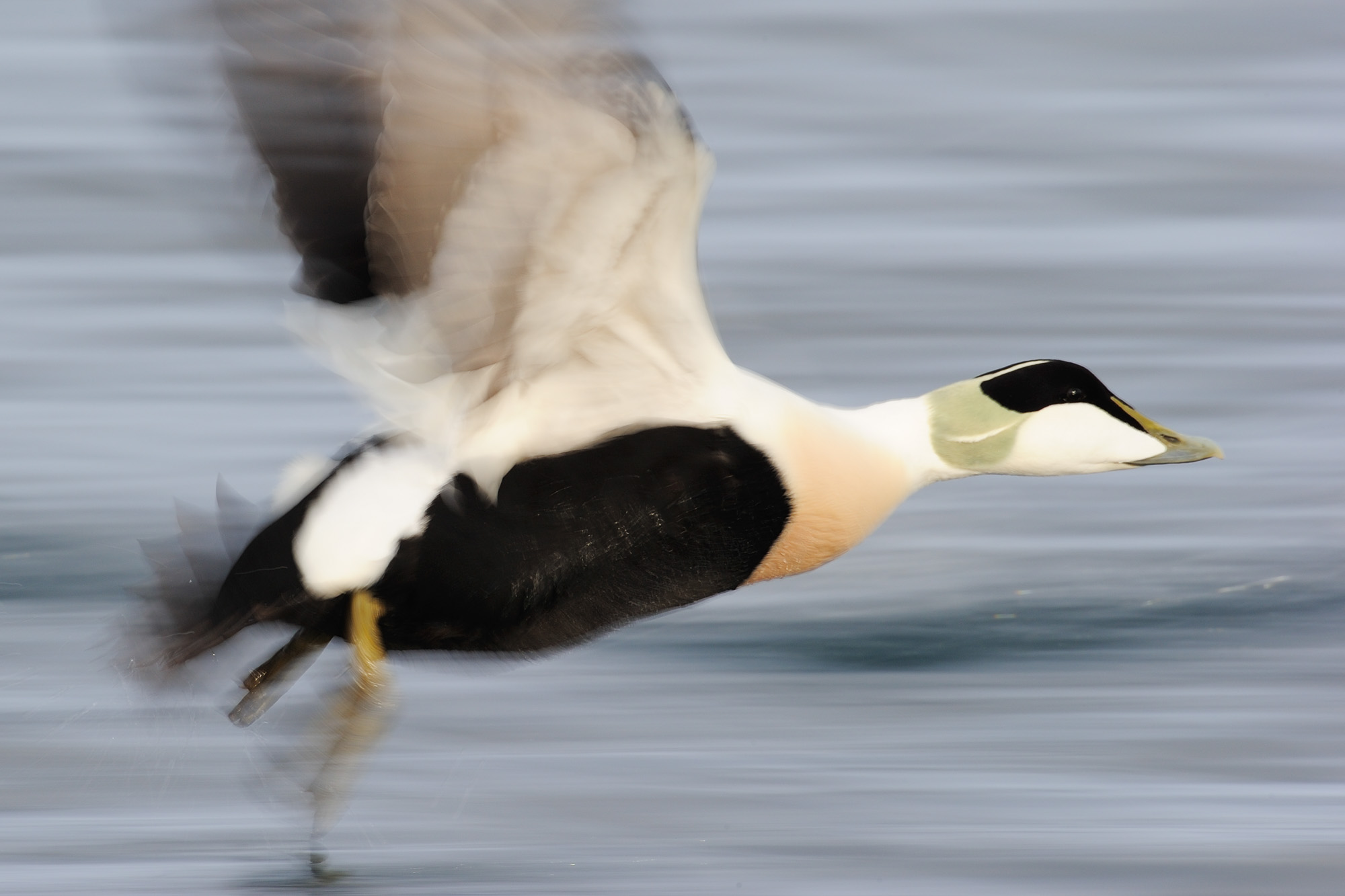 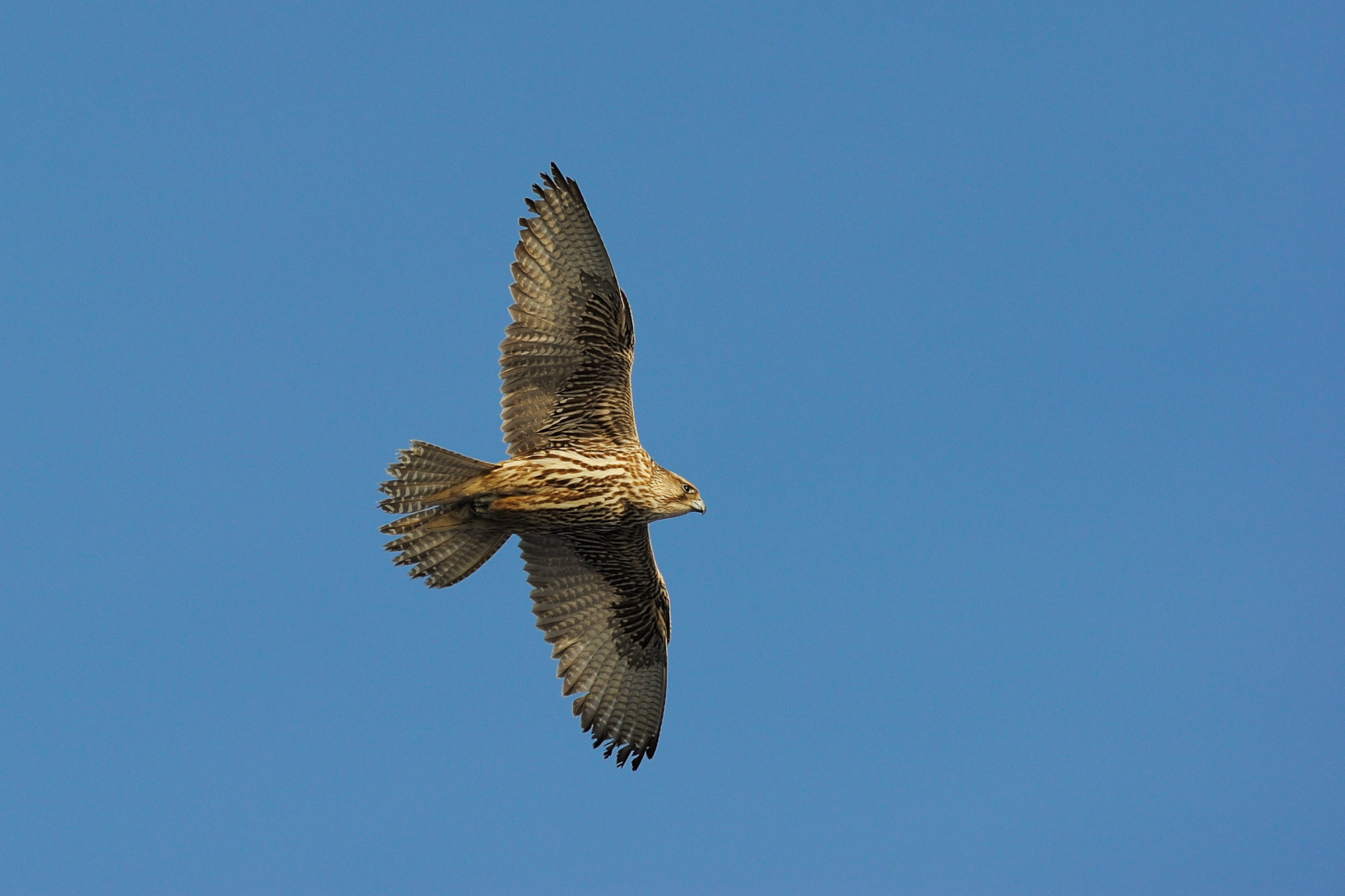 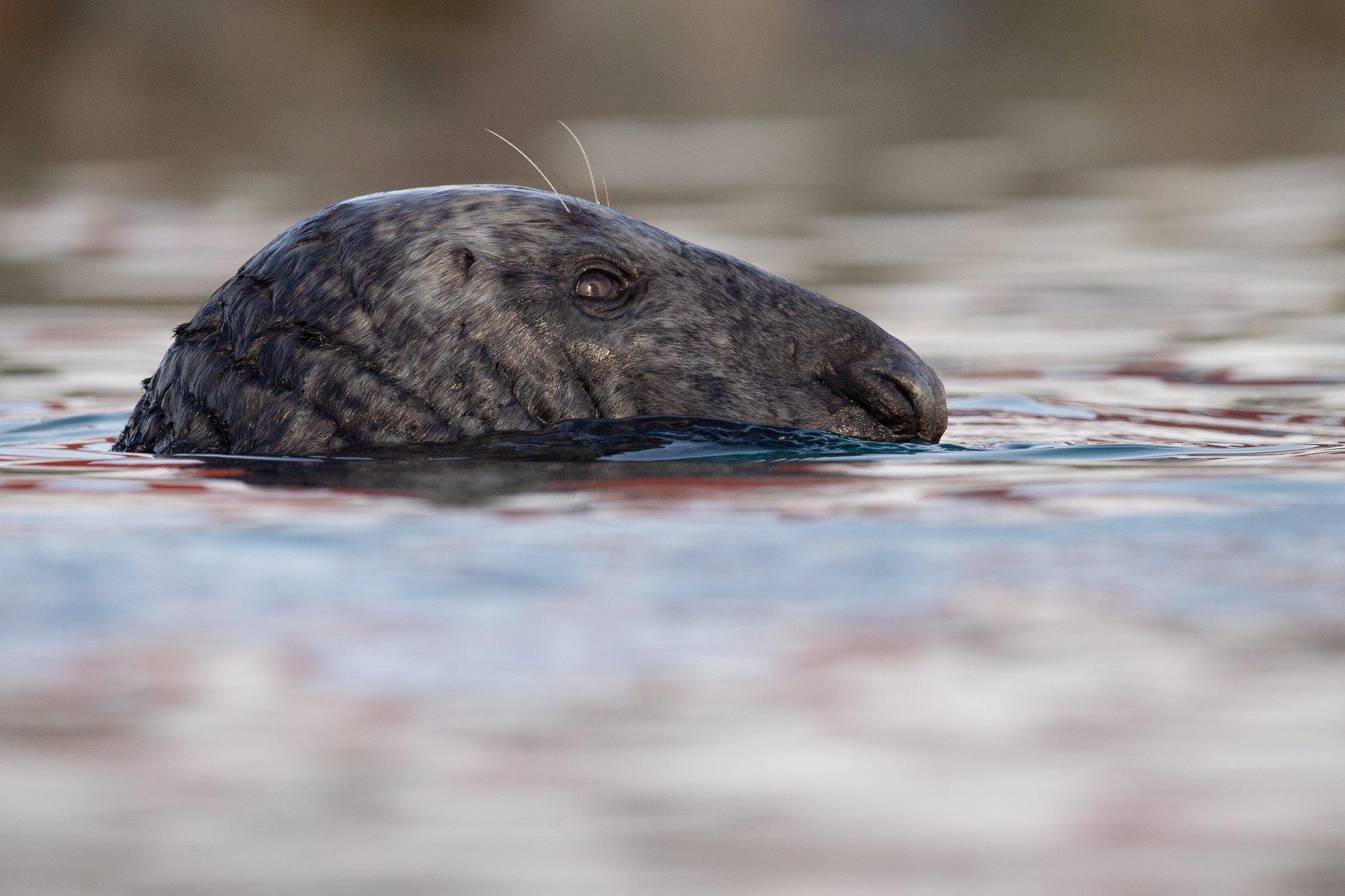 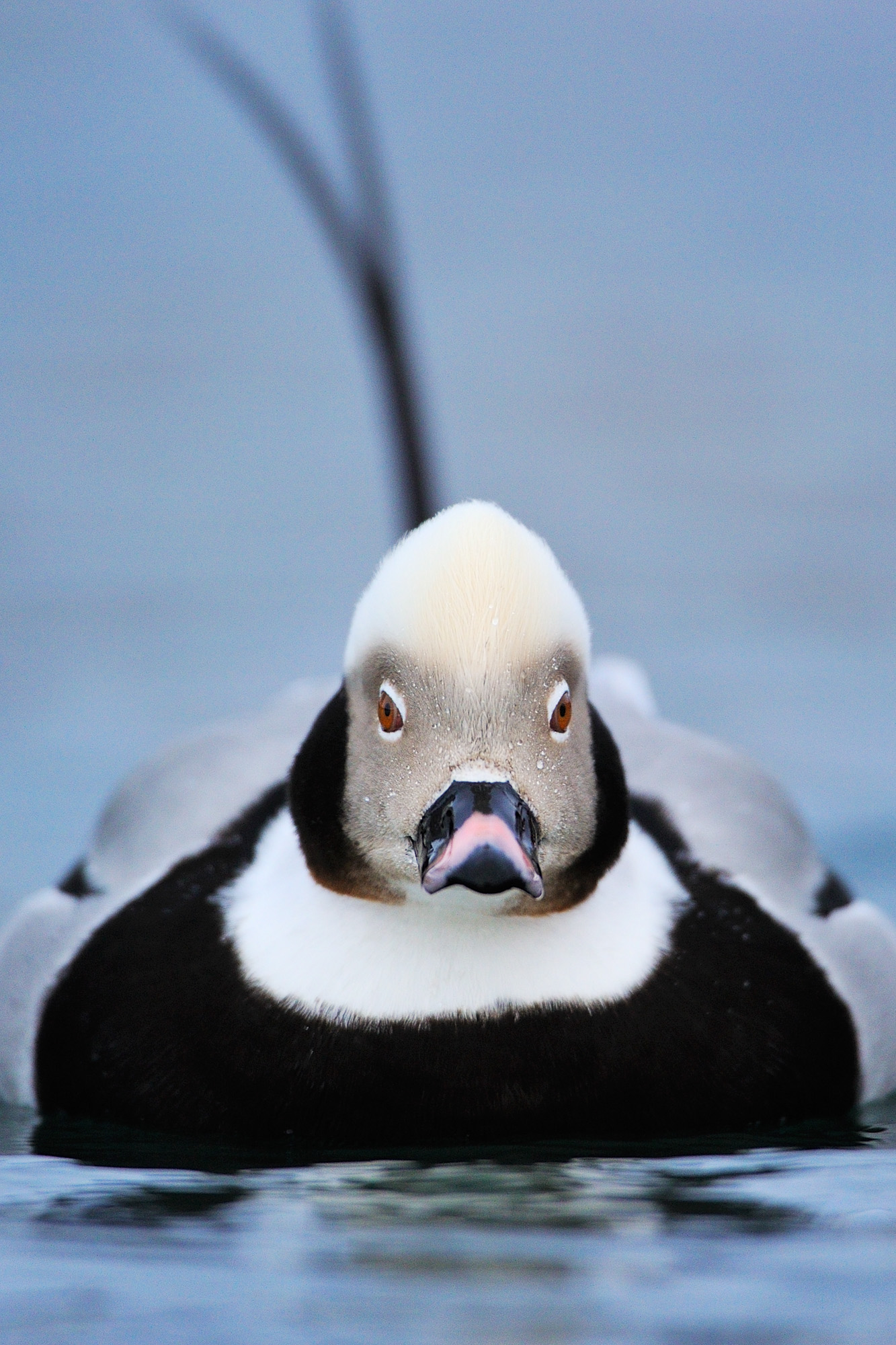 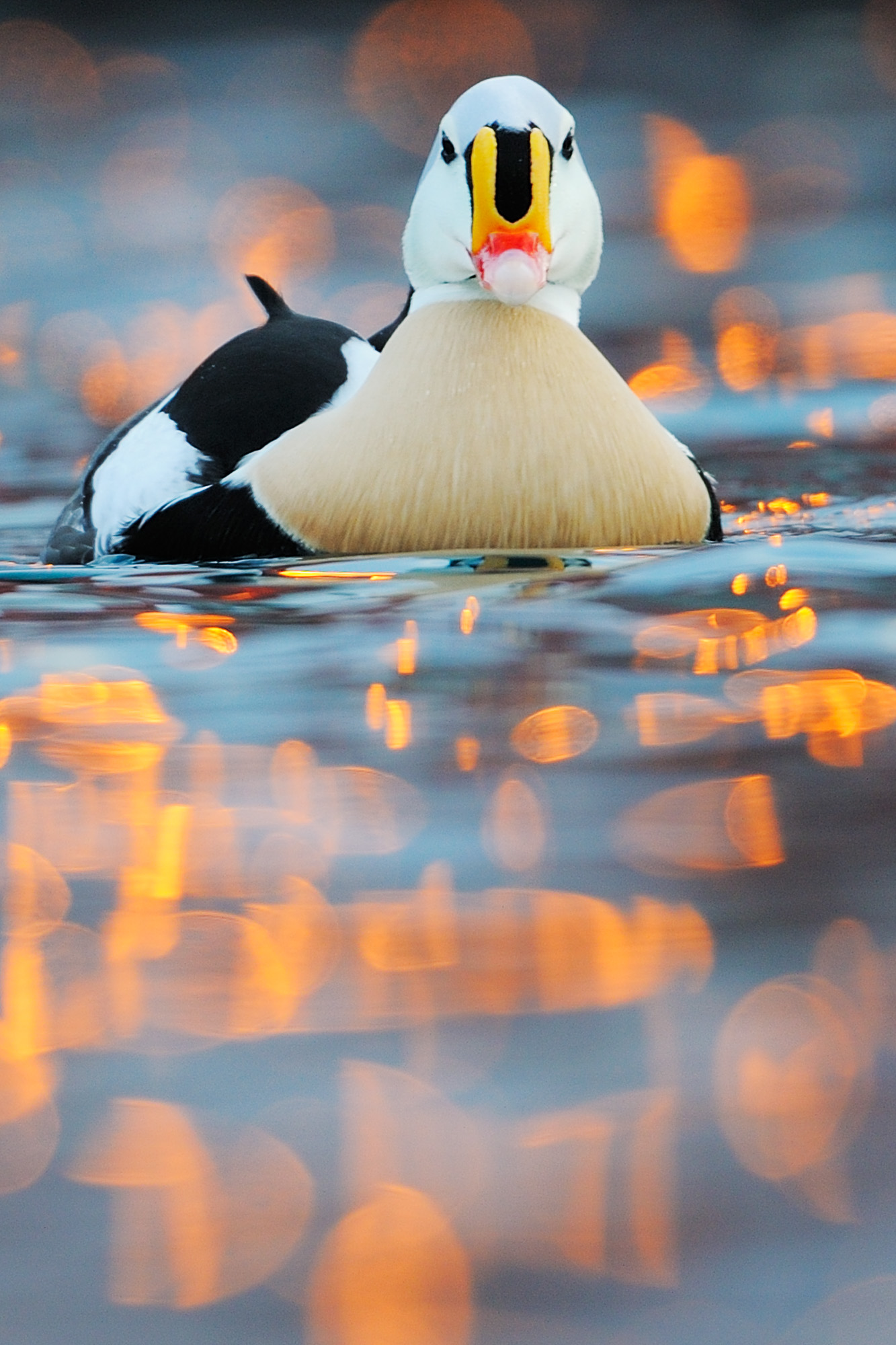 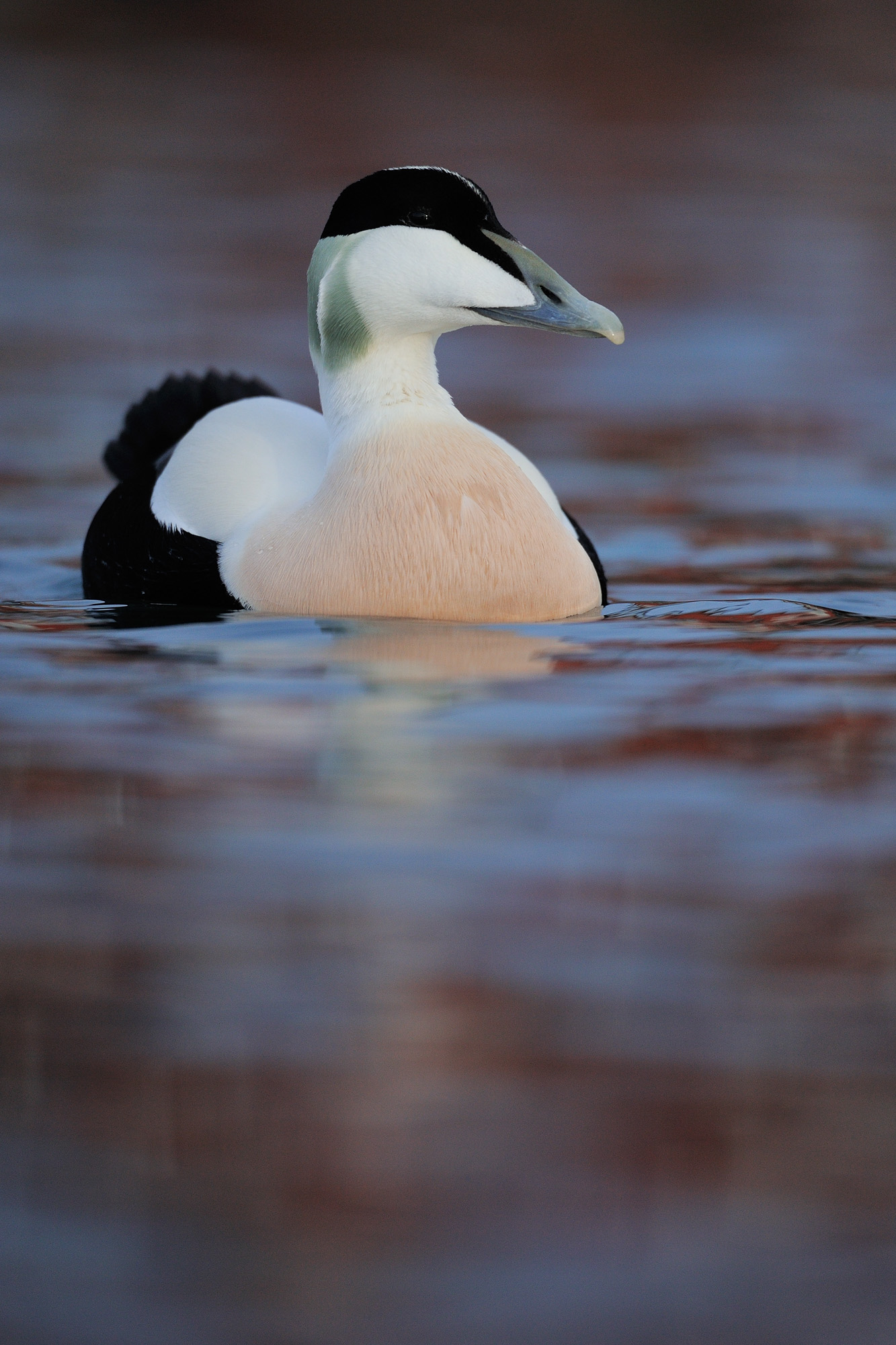 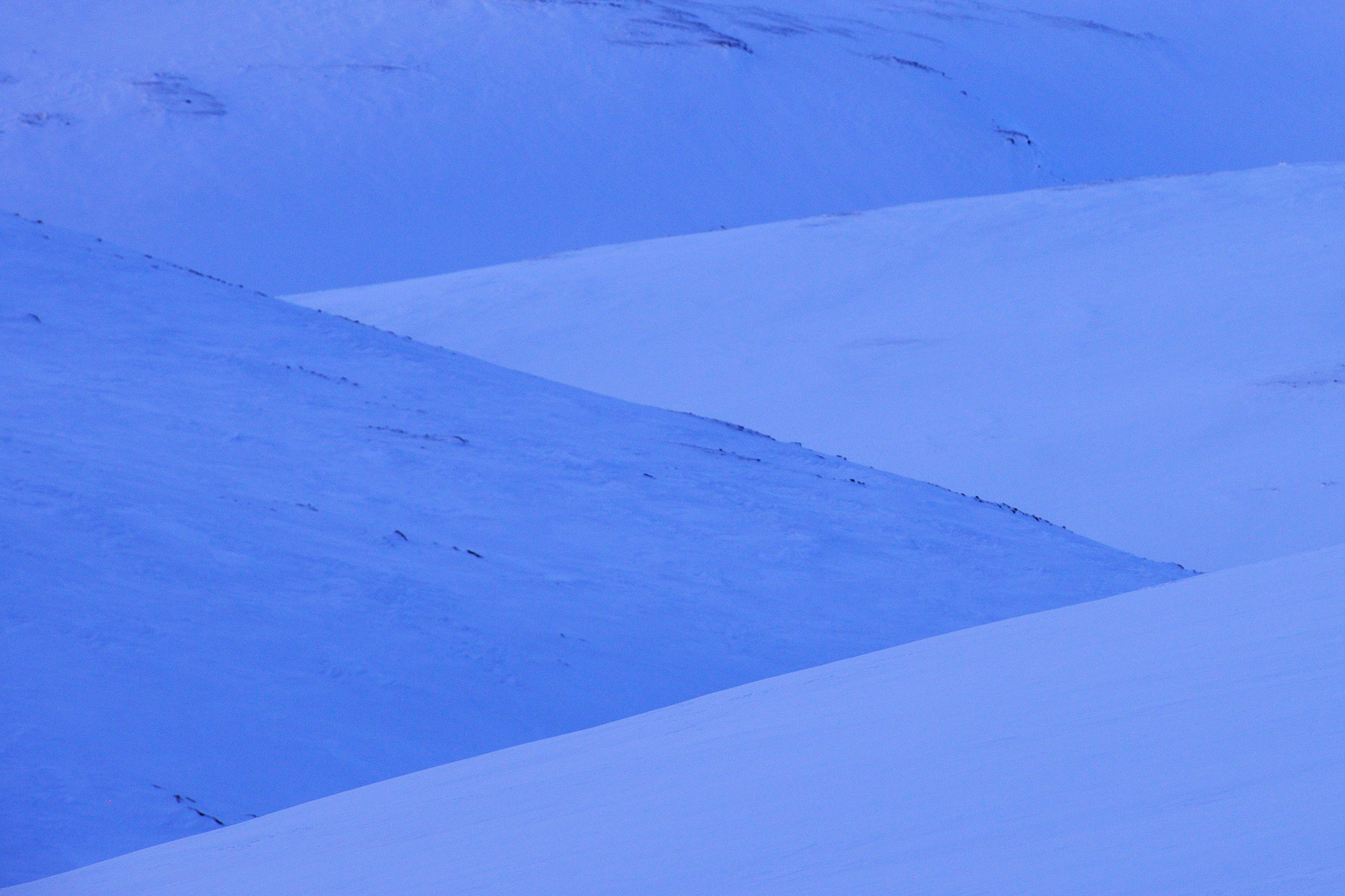 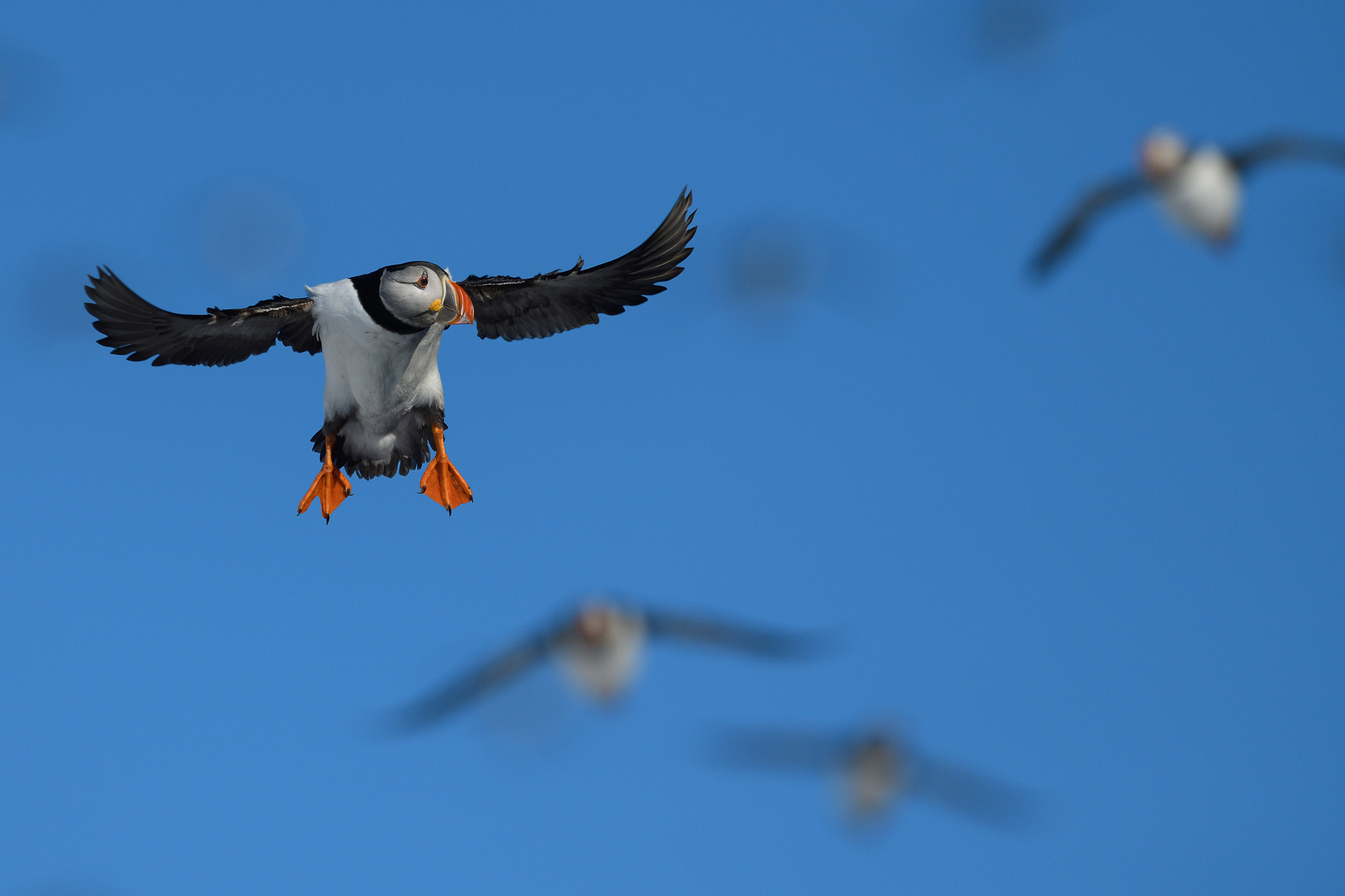 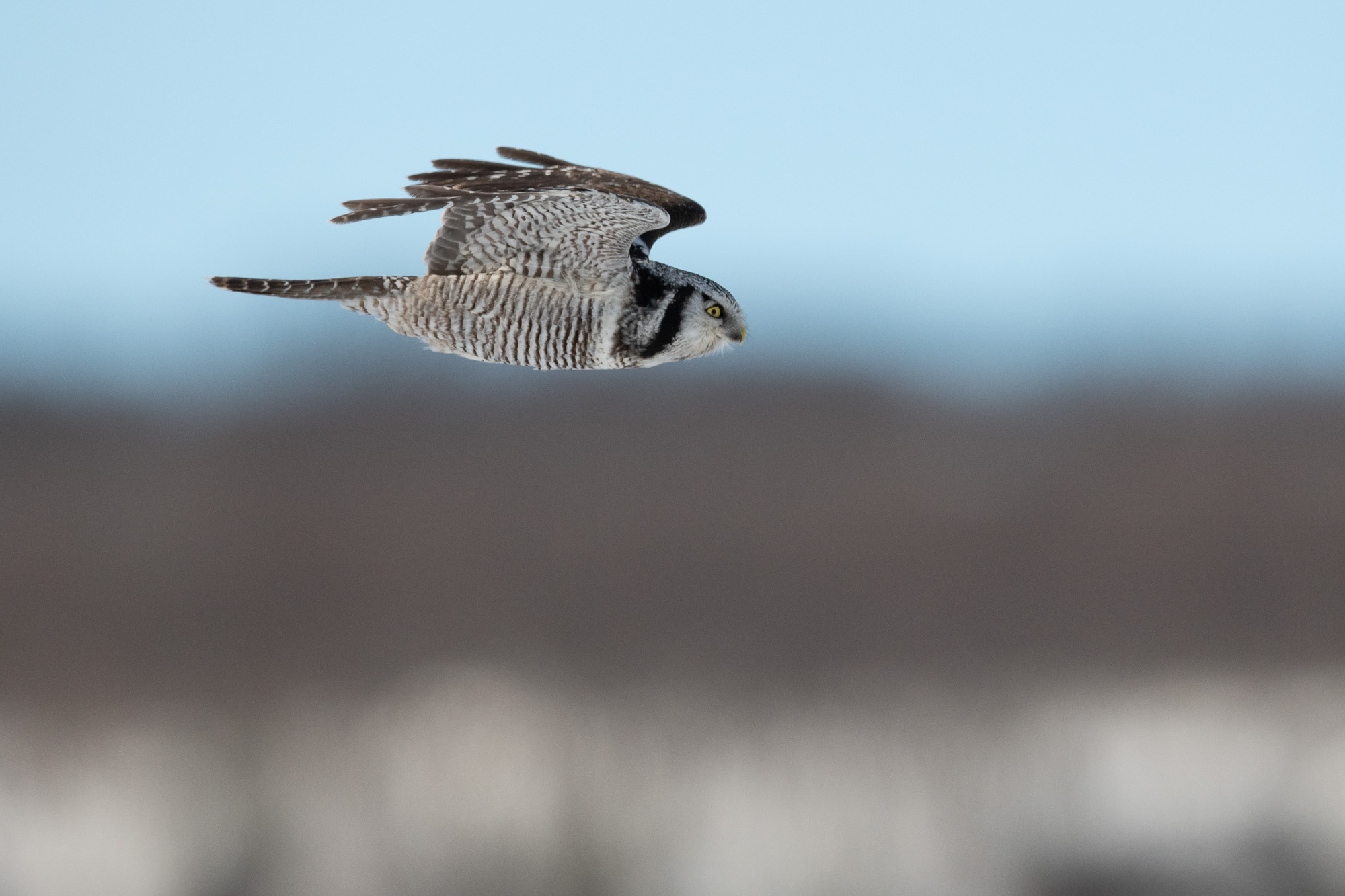 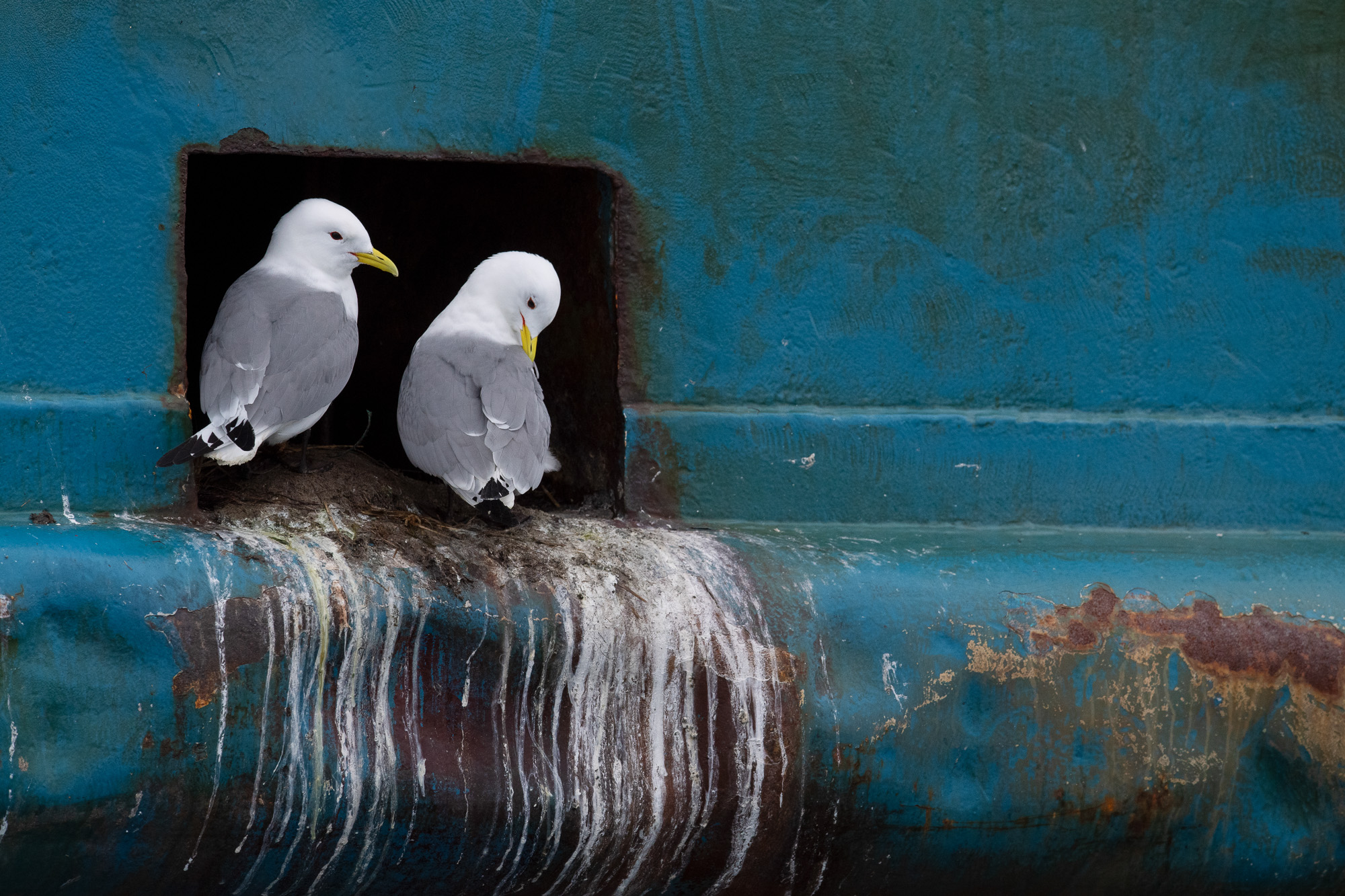 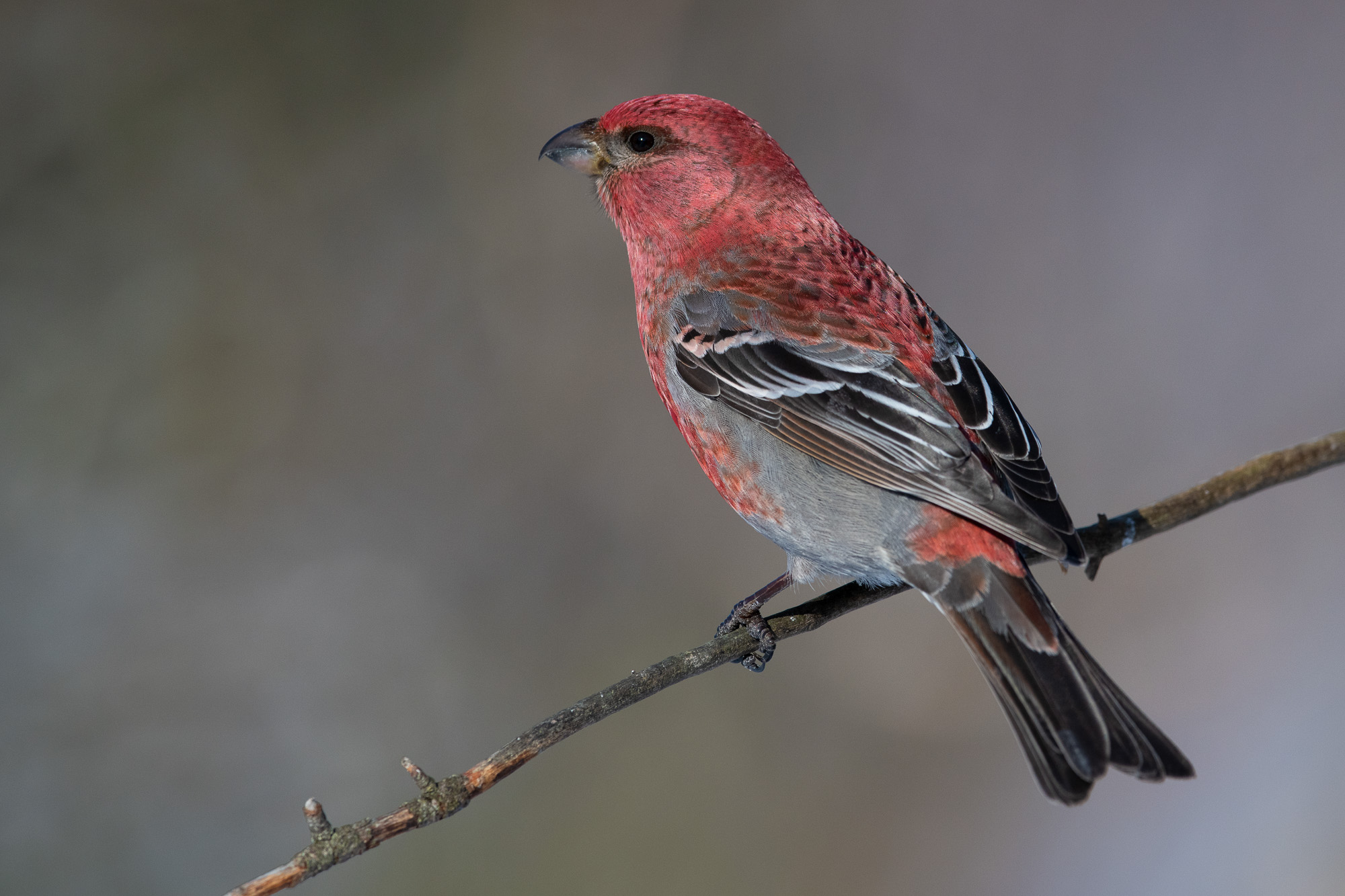 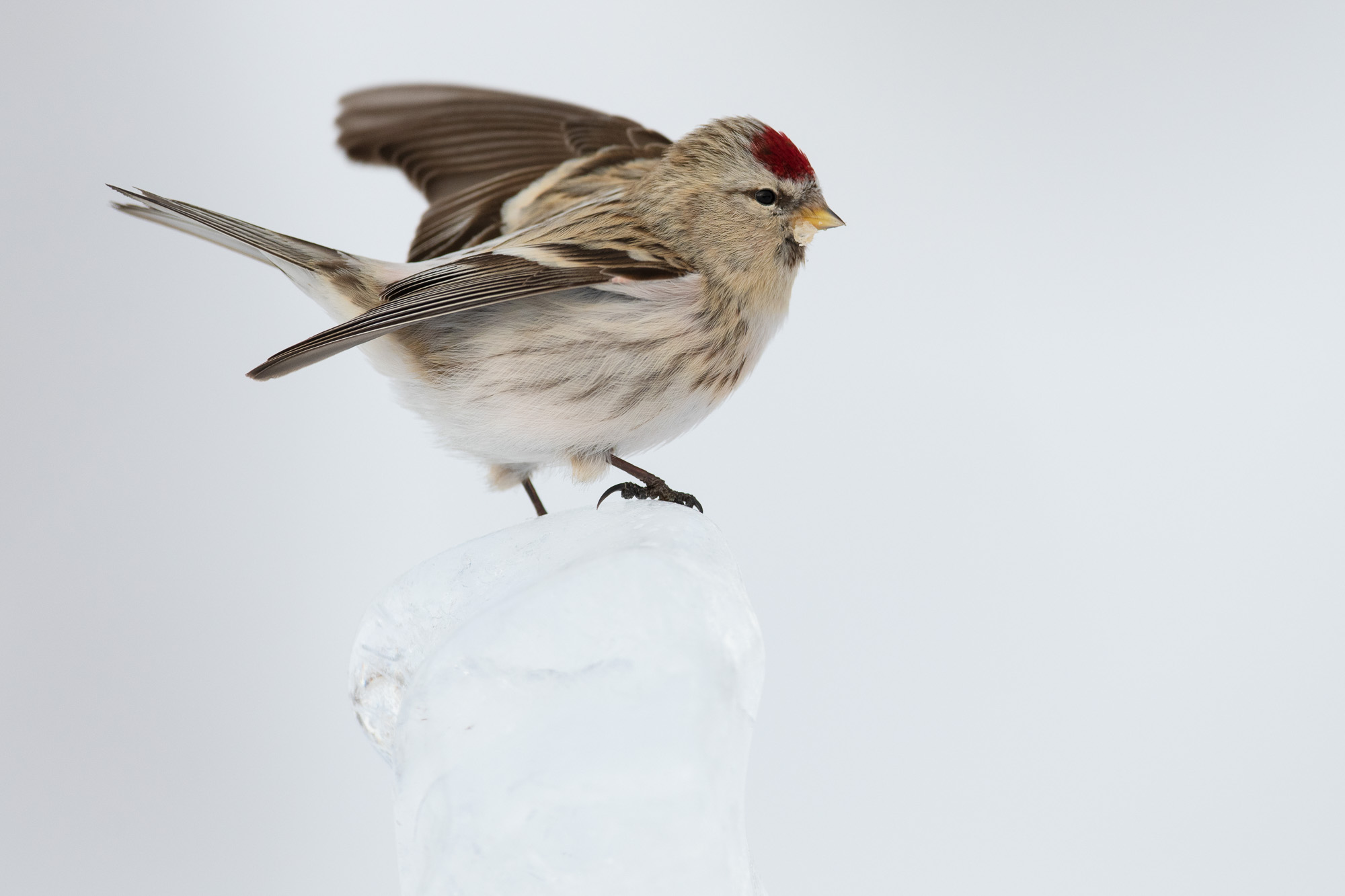 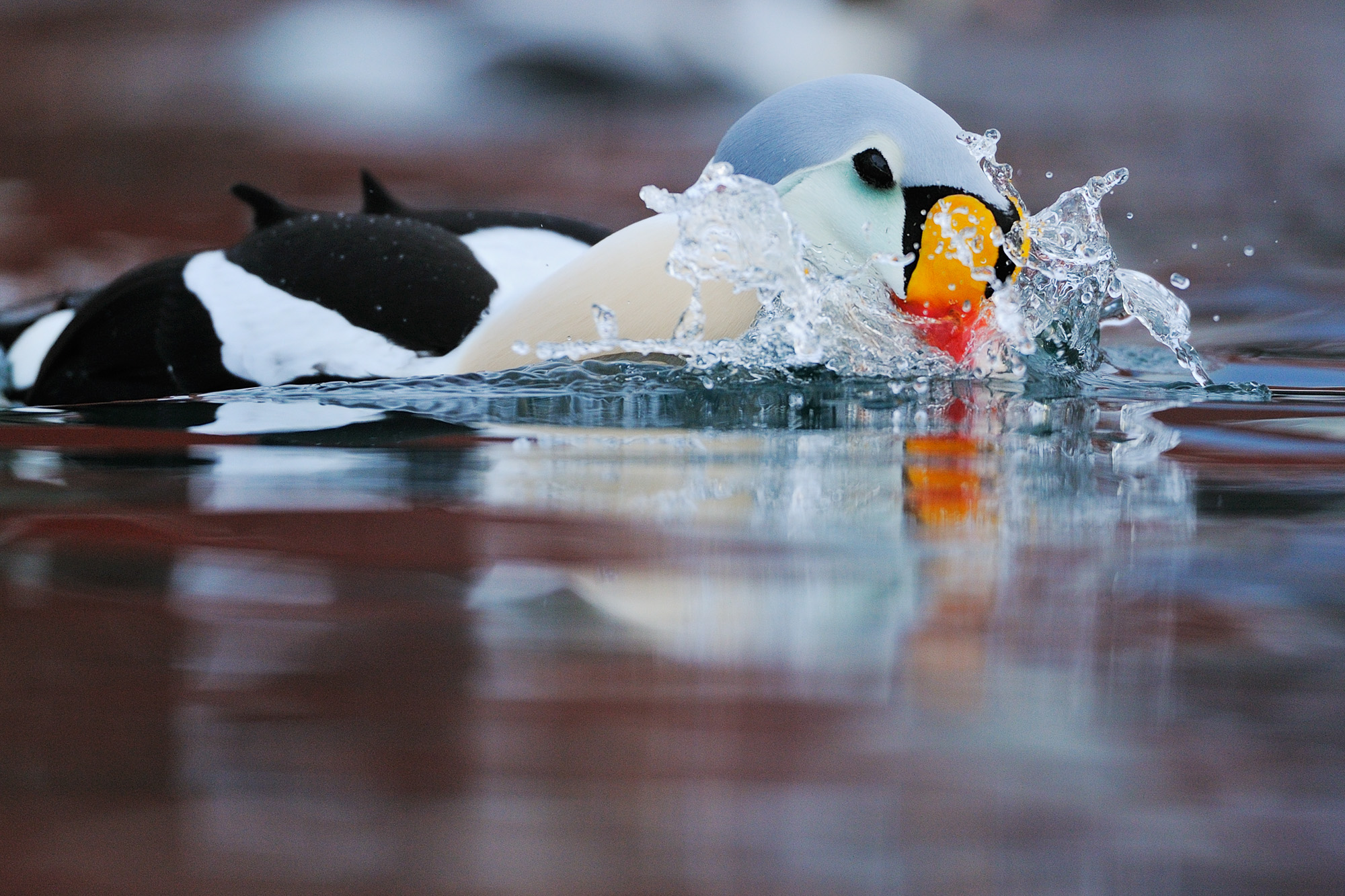 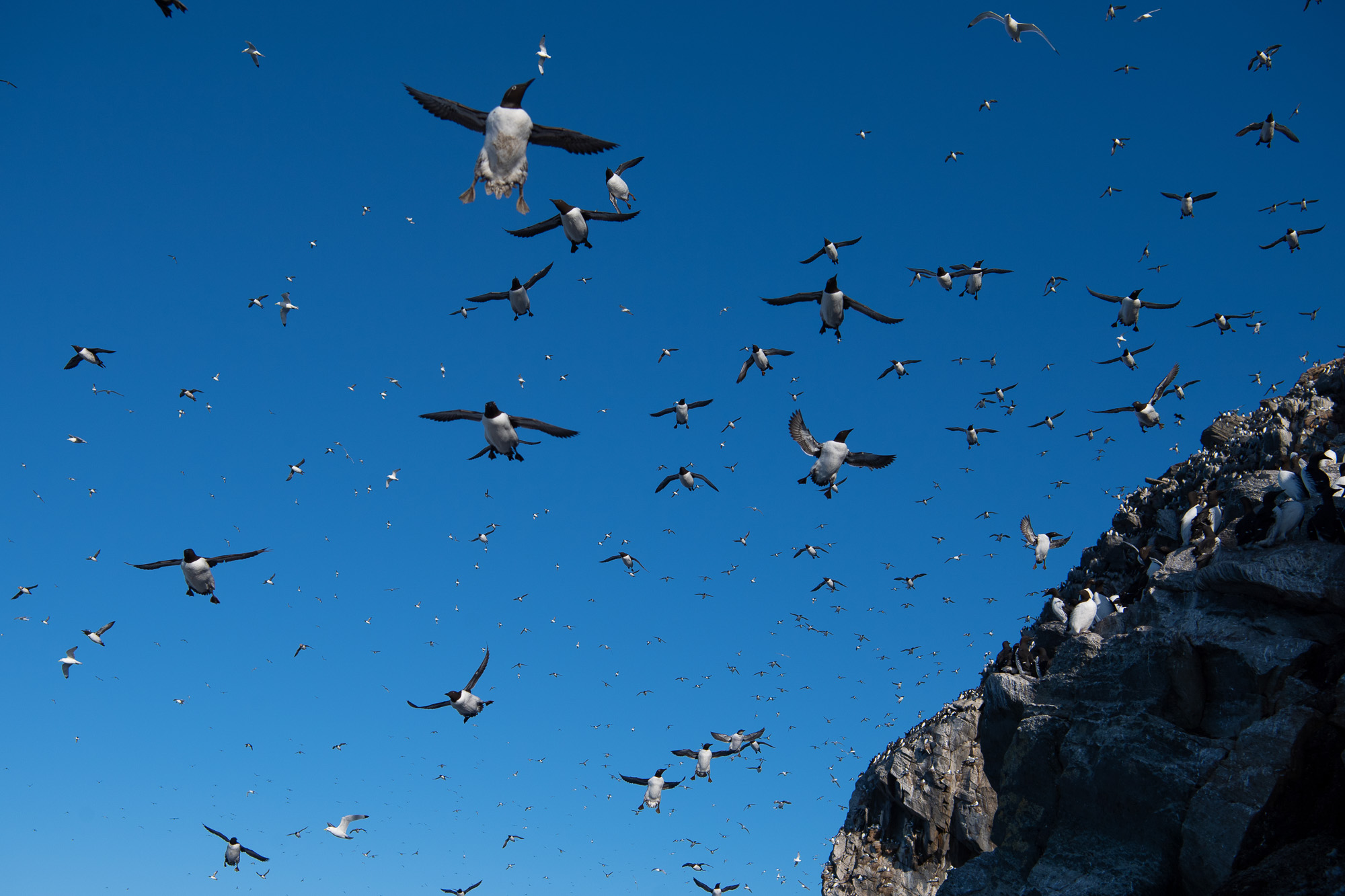 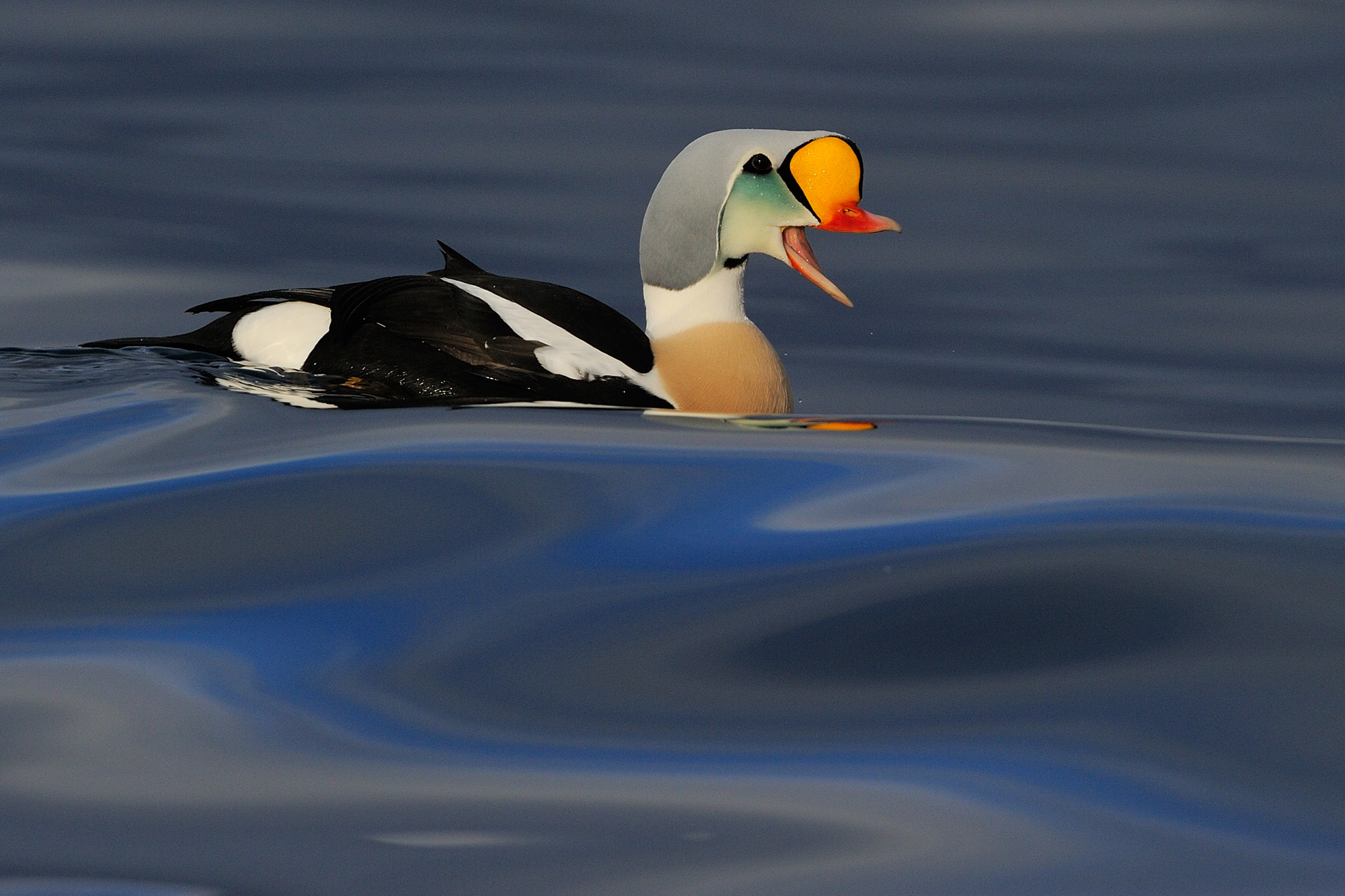 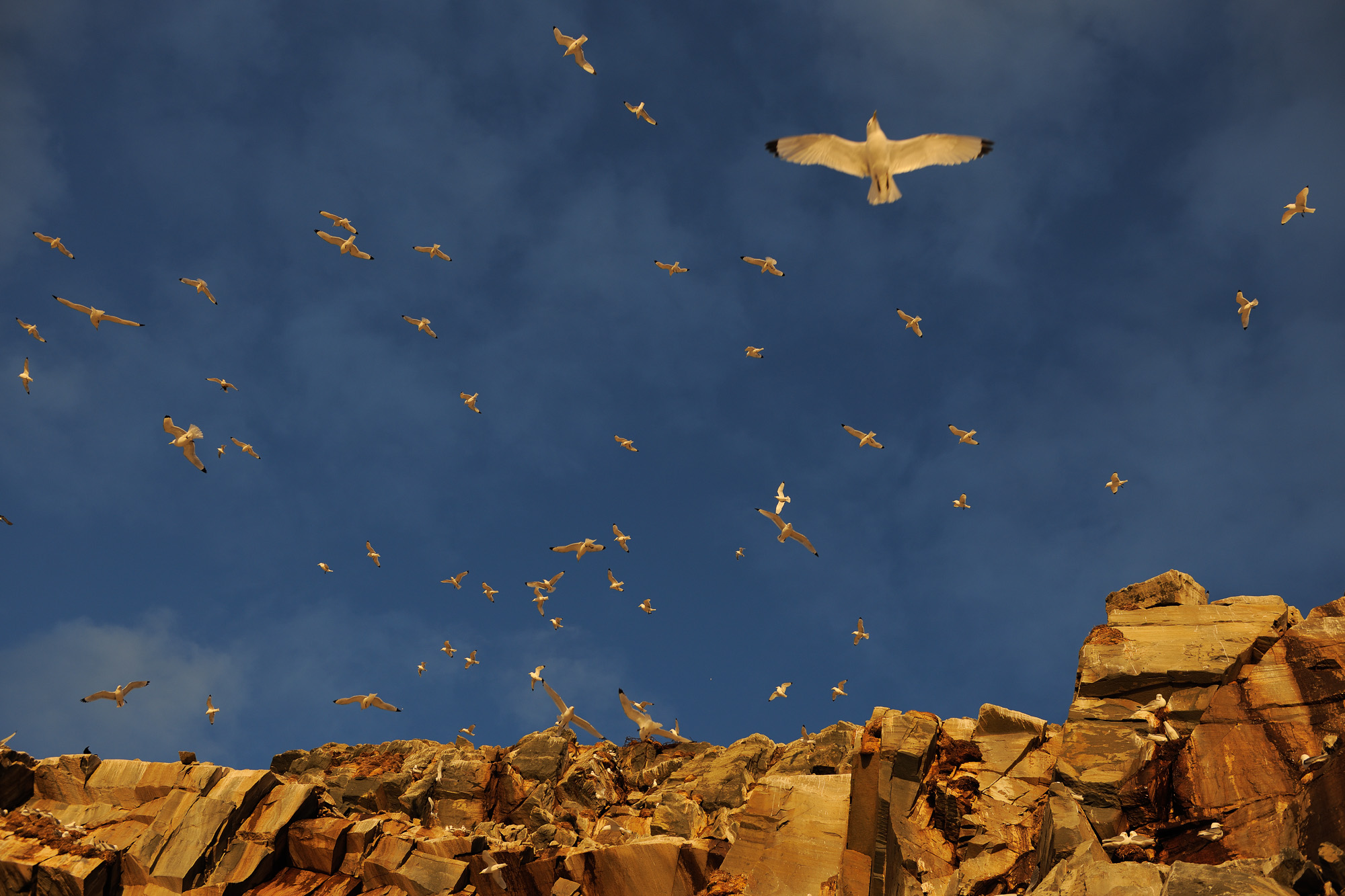 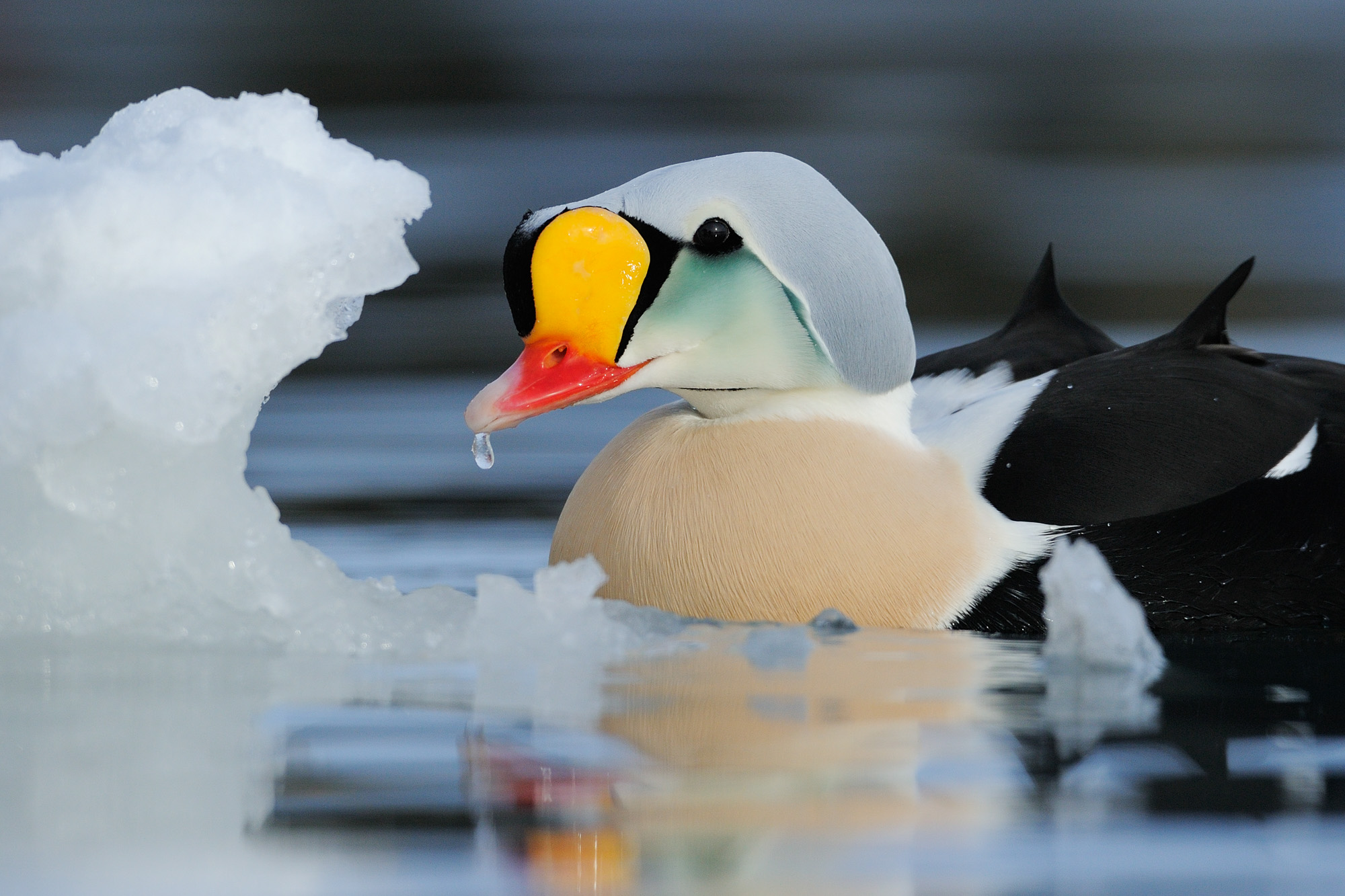 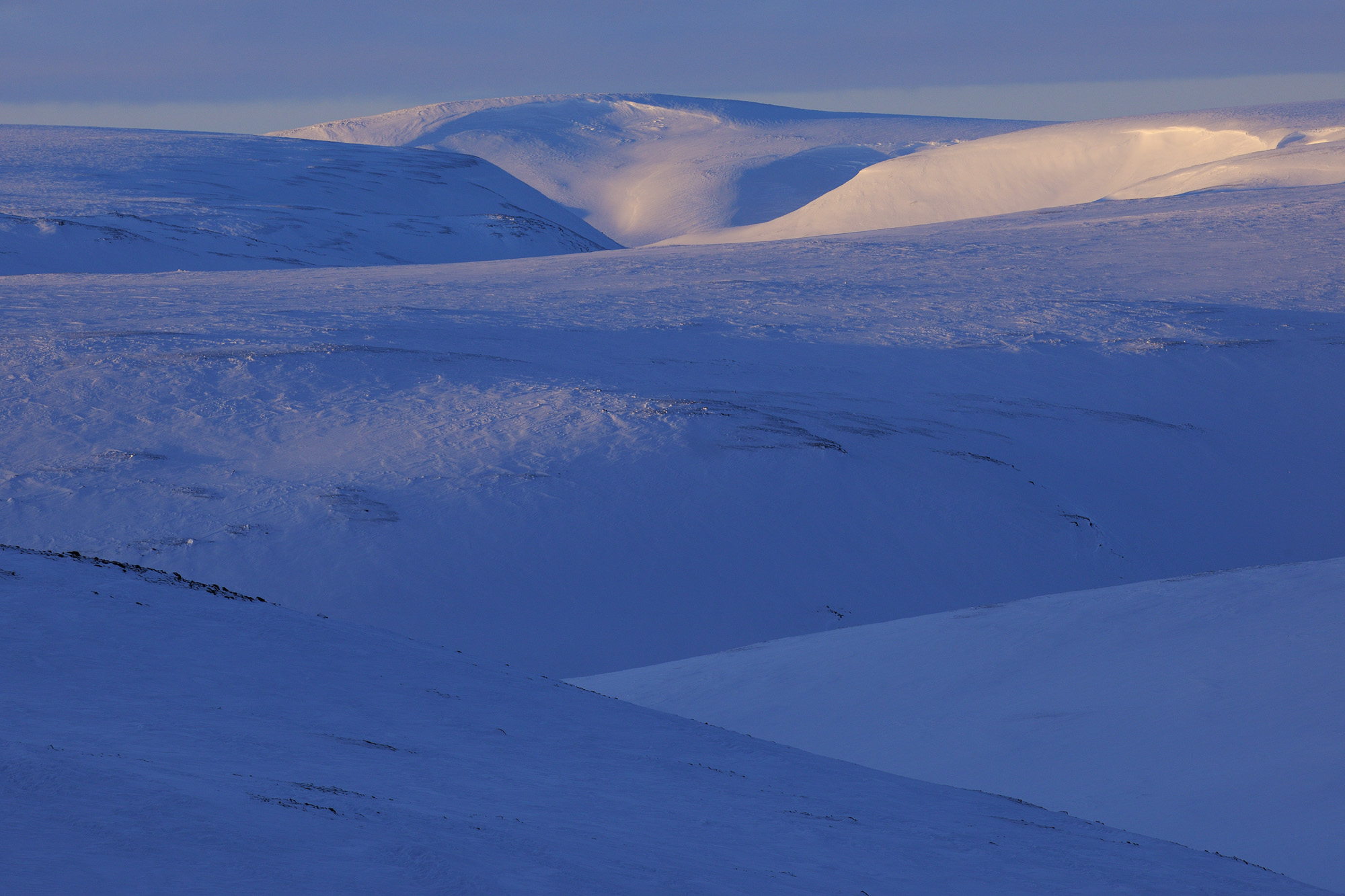 HORNØYA
With its handsome lighthouse and its charismatic location, right at the final outer skerries before the Arctic Ocean, this little island is one of Europe’s finest and most accessible seabird colonies and also Norway’s easternmost point, in line with Istanbul! Everyone with a passion for the natural world, should at some point in life treat themselves to visit a teeming and pulsating bird cliff, where there is action in all directions, all around the clock.

We step ashore in the intense and fabulously well-populated bird colony here, with its 80,000 pairs of Brünnichs guillemot, Shag, Puffin, Cormorant, Common guillemot, Black guillemots Razorbill and Kittiwake, just during the time when the Puffins usually arrive in large numbers for the breeding season. Hornøya is often considered having Norway’s finest bird cliffs. The seabirds here also usually make themselves very easily available for fantastic photo opportunities. The birds nest almost on the path and have very different things to think about, than about us, almost like in the Galápagos Islands. For those who shoot film, do not forget to bring the microphone, because the soundscape here is absolutely stunning and the din intense. Often a Gyrfalcon or White-tailed eagle comes by in search of prey in the slopes of the bird mountain and not infrequently they show up at fairly good photo distances, as long as you are quick and observant enough and have a little luck …

THE TUNDRA
We also meet the landscapes of the snow- and wind-shaped Arctic Tundra in several places up here, both in the mountains and down at the edge of the mountain birch forest. A snowmobile sled ride takes us to a bird feeding site near a mountain stream, where good chances are usually possible to photograph species such as Hoary redpoll, Common redpoll, Siberian tit and Willow tit. There is also often a Hawk owl or two around here and sometimes Ermine or Willow ptarmigan are seen here.

THE TAIGA FOREST
In Pasvik National Park we meet the wild Taiga forest with its Scots pines, plus some of its winter bird species. Here we go for a snowmobile sled ride out into the woods and take photos at a proven feeding site for squirrels and birds such as Siberian tit, Pine grosbeak, Willow tit, Siberian jay and sometimes a Hawk owl paying a visit. At times Willow grouse hang around here, in their snow-white winter dress.

This Varanger tour is simply an unusually complete Spring/Winter trip to one of Europe’s finest and wildest natural areas. Providing opportunities for close encounters with a number of our continent’s most spectacular and exotic bird species. During the evenings, the tour leader will show pictures, give workshop lectures and go through things like camera technology, settings and some important Top tips for the nature photographer. About everything from composition and how to best approach wild animals, over to how to most appropriately set camera functions such as autofocus and flash, or how to interpret the histogram for best exposure. We also look at the participants’ own best photos from the trip. The group is small, for there to be will be maximum time for everyone to discuss photography with the tour leader and so that we will have a enough space in the minibus. 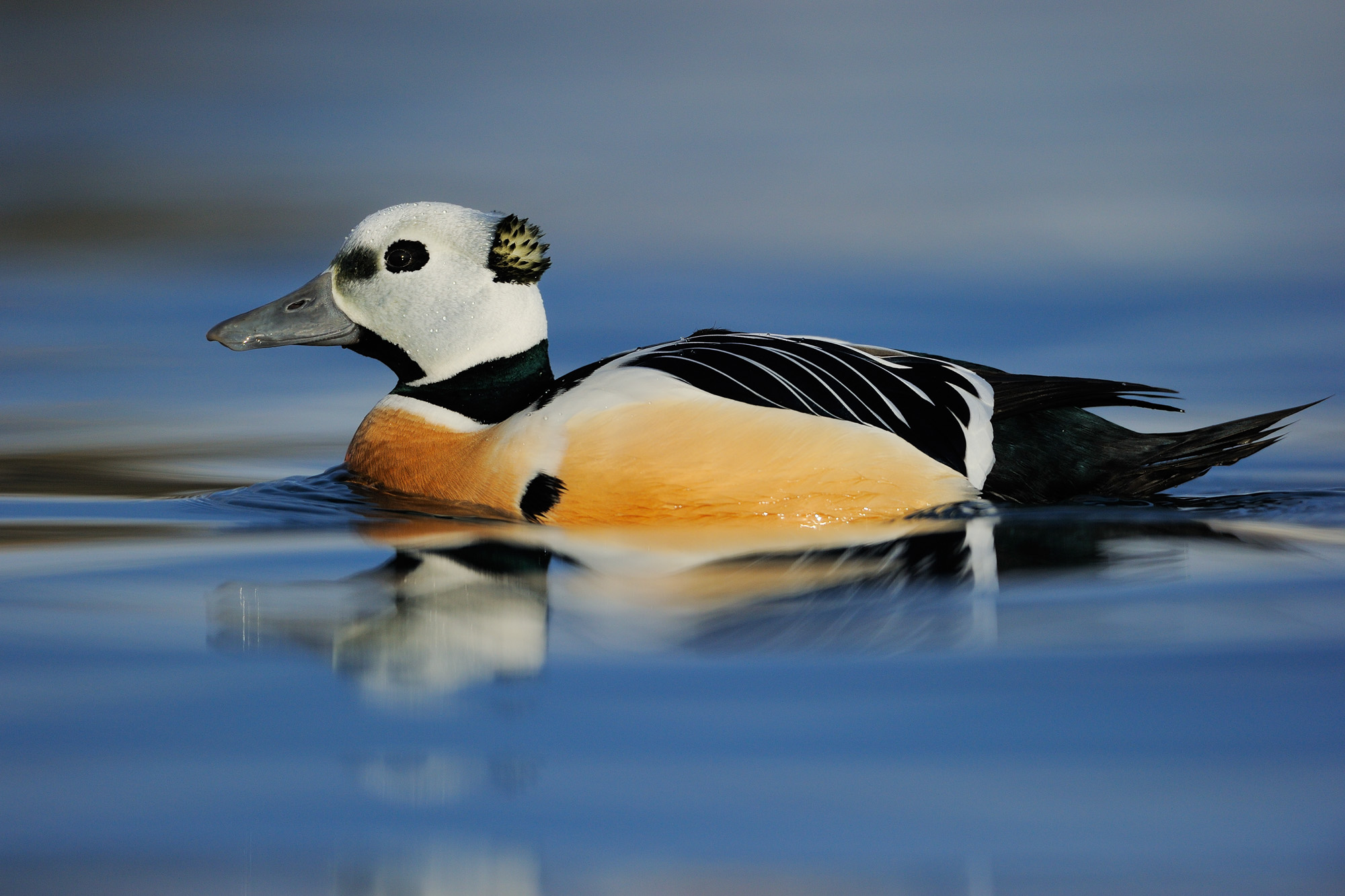 Day 1 (17/3) (Dinner)
We meet up at Kirkenes airport (KKN), and depart by minibus to the small fishing port town Vadsø. Dinner and overnight at hotel.

Day 2 (18/3) (Breakfast – Lunch – Dinner)
Early breakfast at the hotel, then to the small fishing town of Vardø and from there with the harbor guard’s ship the short trip over to Hornøya, a small, treeless island with a handsome lighthouse and a steep bird cliff with a phenomenal seabird colony of approx. 80,000 pairs of Kittiwake, Shag, Puffin, Razorbill, Brünnichs guillemot, Common guillemot, Great cormorant and usually with daily visits by Gyrfalcons and White-tailed eagles. One of the finest bird cliffs along the whole Norwegian coast. Packed lunch from the hotel. In the afternoon back to Vardø and further along the coast to Vadsø. Overnight and dinner at hotel. 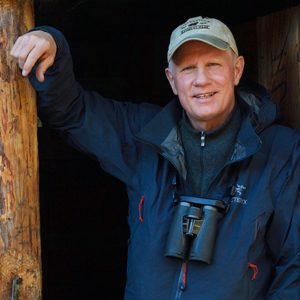 Staffan is one of Sweden’s internationally most recognized photographers. In 2011, Outdoor Photography Magazine called him ”one of the most influential photographers in the world”. Appointed ”Wildlife photographer of the year” in Sweden and a winner of international photo competitions, such as:

Staffan has been on the jury of several international photo competitions and was one of the main jury members in World Press Photo 2013.

Since we will have opportunities of many different kinds of motifs – everything from hide  photography of birds, to magnificent landscapes – it is a good idea to bring everything from wide-angle lens to telephoto lenses. A wide-angle zoom lens with f ex focal length 24-70 mm is excellent not only for landscape photography but can also come in handy in the hides. A telephoto / zoom lens, e.g. 80-400mm, 200-500mm or the like provides good conditions for taking varied pictures of birds from the hides and can also be useful for different motifs within landscape photography. Telephoto lenses with fixed focal length, e.g. 400 mm, 500 mm or 600 mm are very useful for bird photography. To ”increase” the focal length if you have a shorter telephoto or a zoom, you can use a teleconverter or use a camera with a DX-format sensor.

If you have access to two camera bodies, it is a good idea to bring both, it is much easier to operate two different camera bodies during the hide sessions.

A tripod is very useful in connection with hide photography, especially if you use longer telephoto lenses.

The temperature on the Varanger Peninsula can in March vary between a few degrees above the freezing point and several degrees under. Real winter clothing and, above all, spacious, warm shoes are recommended! A good idea is to bring clothes in different layers. Closest to the body, preferably clothes in Merino wool material, such as delivered by brands Woolpower or Aklima.

We stay in hotels of middle standard.

Accessibility for the disabled

The accommodations are reasonably accessible, with a bit of help. The nature of the trip means that the hides and certain environments may be less accessible in case of reduced mobility. If you have any questions or doubts, please contact us first so we can discuss what the possibilities look like.

Return flights to Kirkenes (NOTE! Please contact us for information on airline tickets before you book your flights), travel insurance, cancellation protection, drinks, eventual gratuities and items of a personal nature.

The registration fee shall be paid after an invoice from us, right after your booking. The remaining amount shall be paid no later than 60 days before the trip. Payment will be in Swedish crowns (SEK).

If you are an EU citizen travel within the EU or to the Schengen countries Norway, Switzerland, Iceland and Lichtenstein, you must always bring your passport or national ID card issued by the police. When checking in for a flight, a passport is required. With reservation for that government decisions because of the somewhat unclear Covid-19 situation may mean various limitations that we do not know of today.

For citizens outside of the EU please check if you need a visa to enter Norway.

Contact your insurance company to see that you are properly covered for travel insurance and cancellation protection.

Please check with your doctor.

Our tours are open to all nationalities, which means that the group is often international.

Our tour guides speak both Swedish and English, and sometimes also more languages. 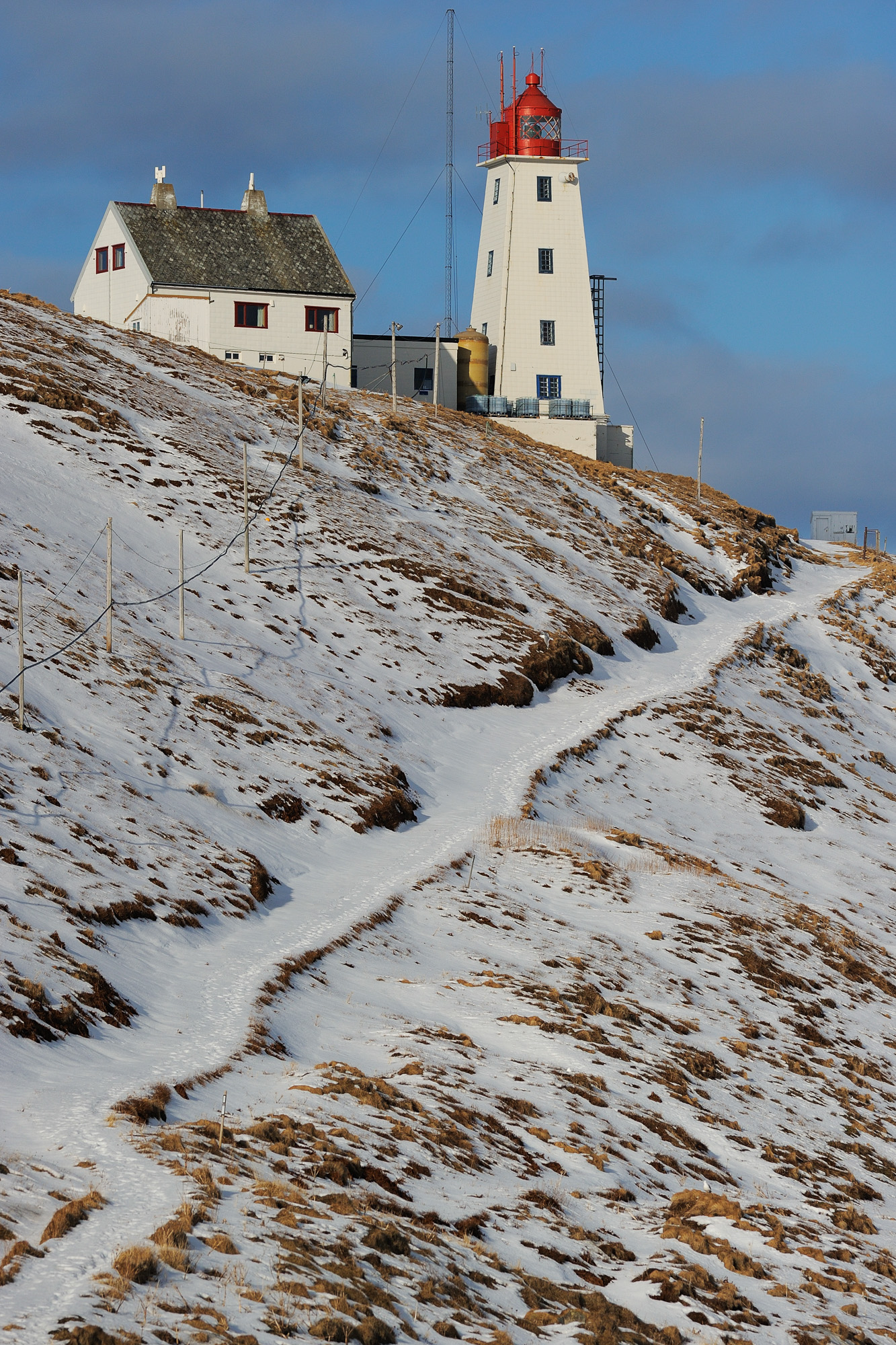